In 2017, Ultima (NOR) hosts several young composers as well as performers, supported by the ULYSSES Network in the framework of their ULYSSES Journeys, allowing them to create and to perform new works in the festival.

Besides being selected as one of the ULYSSES composers, Diego Ramos Rodriguez also takes part in this concert as violin player in the Améi Quartet, performing his own new work amongst others.
At this occasion, the Améi Qartet also presents the premiere of a new piece by young Nordic composer Rebecka Ahvenniemi, commissioned by Ultima.

Another promising performer, selected by the ULYSSES Network and participating to the concert is Joshua Hyde (AUS), performing with his duo for saxophone and percussion (Noam Bierstone) called scapegoat  works by Mauricio Pauly, Michelle Lou and Pierluigi Billone.

In addition to the concert on 16th September the ULYSSES composers and performances have the chance to take part in the Ultima Academy, with composer/performer Maja Ratkje as mentor. 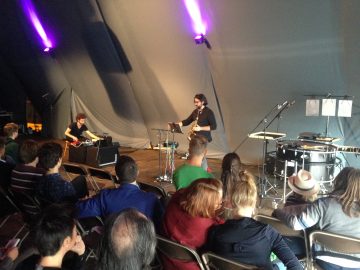